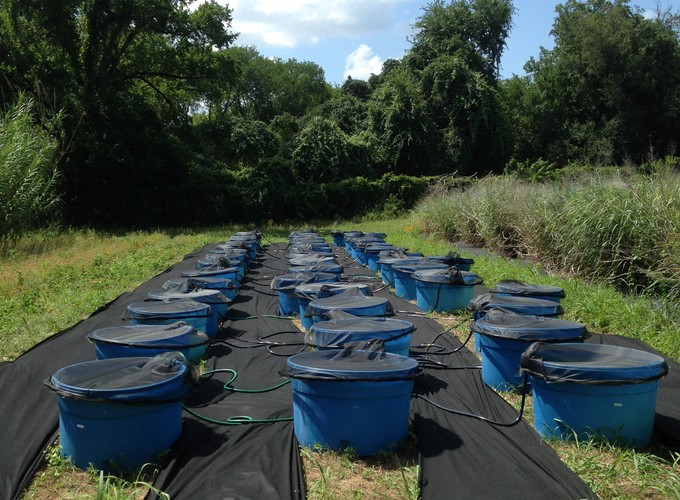 The experiment at Brackenridge Field Laboratory. Photo by C. Rakowski (2017)

Beyond the fish-Daphnia paradigm: testing the potential for Neoplea striola (Hemiptera: Pleidae) to cause a trophic cascade in subtropical ponds

Trophic cascades, or indirect effects of predators on non-adjacent lower trophic levels, have become paradigmatic in ecology, though they are thought to be stronger in aquatic ecosystems. Most research on freshwater trophic cascades focused on temperate lakes, where fish are present and where Daphnia tend to dominate the zooplankton community. These studies identified that Daphnia often play a key role in facilitating trophic cascades by linking fish to algae with strong food web interactions. However, Daphnia are rare or absent in most tropical and subtropical lowland freshwaters, and fish are absent from small and temporary water bodies, where invertebrates fill the role of top predator. While invertebrate predators are ubiquitous in freshwater systems, most have received little attention in food web research. Therefore, we aimed to test whether trophic cascades are possible in small warmwater ponds where small invertebrates are the top predators and Daphnia are absent. We collected naturally occurring plankton communities from small fishless water bodies in central Texas and propagated them in replicate pond mesocosms. We removed zooplankton from some mesocosms, left the plankton community intact in others, and added one of two densities of the predaceous insect Neoplea striola to others. Following an incubation period we then compared biomasses of plankton groups to assess food web effects between the trophic levels including whether Neoplea caused a trophic cascade by reducing zooplankton. The zooplankton community became dominated by copepods which prefer large phytoplankton and exhibit a fast escape response. Perhaps due to these qualities of the copepods and perhaps due to slow consumption rates by Neoplea on key grazers, no evidence for food web effects were found other than somewhat weak evidence for zooplankton reducing large phytoplankton. More research is needed to understand the behavior and ecology of Neoplea, but trophic cascades may generally be weak or absent in fishless low-latitude lowland water bodies where Daphnia are rare.